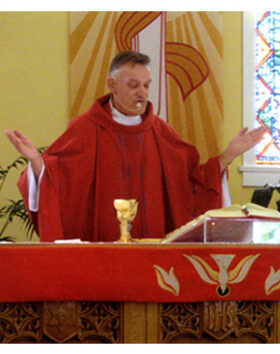 Jim recognized that his life was a journey of faith that began with a gift of a tiny Gideon’s Bible in Grade Five.

Much later in life, after working in the Royal Canadian Air Force and the BC Forest Services and having been introduced to the Catholic Faith by a friend, John Schmitz, he was inwardly directed to enter Saint Joseph’s Seminary in Edmonton to study Theology. From there, he went to Saint Paul’s Seminary in Ottawa where he completed his studies in Pastoral Counseling.

After several years as a Pastoral Associate in the military chaplaincy, he was ordained to the Priesthood in 1991. He served for a total of 20 years as a Roman Catholic Chaplain. He was incardinated in the Roman Catholic Military Ordinariate of Canada with whom he shared his faith in many communities across Canada.

Upon his retirement, he obtained his pilot’s license and travelled the world expanding his friendships wherever he went.  But, once again, he was prompted toward his ministry, this time in the area of marriage.  He obtained a Master’s Degree in Canon Law from St. Paul’s University in Ottawa.  This allowed him to work with various marriage tribunals as a judge which he did until he was diagnosed with cancer last October at the age of 76.

In his final months, Jim made an effort to share his faith, commune with God and to experience joy up to his final breaths on this physical earth.  He intended to reunite with much-loved family members in heaven which he imagined as a field of daisies where people wore white.  After that, only God knows the continuation of his story.

A Funeral Mass presided by the Military Ordinariate of Canada, Bishop Scott McCaig, was held at Our Lady Star of the Sea Chapel, on the 9th of February 2022 at 10:00 am.  To watch a recording of the service click on the following link.