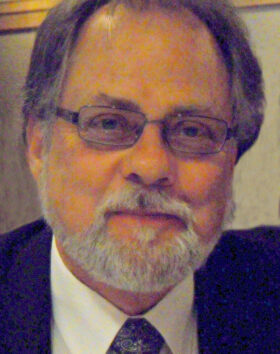 Stefan (Steve to his family) was born in Portsmouth, England, moving to Canada with his parents and baby sister when he was 3.  His early years were spent in Victoria, then later in Vancouver where he graduated from Vancouver College and then went on to earn his teaching certificate.   Working as an elementary school teacher in Williams Lake, he met Sharon, who became his wife of 43 years.  The two returned to Victoria, where he completed a Master of Public Administration and worked for the Province until his retirement.

A perpetual learner, Steve spent his retirement attending a variety of courses – in cooking, drawing, painting, languages (from German to Chinese to Italian), Tai chi and Qigong when he wasn’t working in the garden, reading or listening to music.   Well known to GVPL staff, he would visit the library several times a week, taking out books on any subject under the sun, as well as music he had never heard before.   He loved to debate anything and had an opinion on everything, especially politics.  Favourite times were spent with family and friends, but the most special times were with his children, nieces and nephews (by blood or in heart), and most recently with his grandson.  He was always there for them, giving unsolicited advice and ranting about the importance of education (among other things).  They remember him as the king of adventures, who told wonderful stories and sang the best songs, and who helped to shape their lives.

He passed away peacefully, a year after being diagnosed with glioblastoma.  Due to Covid-19 there will not be a celebration of life at this time.

He is missed by his wife Sharon, and children Adrianne (Todd) and Richard, grandson Alec, and step-grandson Jackson.  He was big brother to Norah, Kerry, Teresa and Michael, brother-in-law to Linda (Guy), and ‘close as a brother’ to Cedric (Lissa).  He was a favourite uncle to nieces Shay (Doug), Monique, Mirelle (Cedric), nephew Jeff, and great nephew Kaelan.

The family would like to thank the nurses, HCAs and staff of 8 South and 4 South at RJH, and Bridgeview and Waterview Units at the Gorge Hospital for their caring and support over the last ten months.

Donations, if desired, may be made to Victoria Hospice or the B.C. Cancer Foundation.