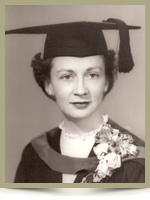 When going through some old papers, Cam found some cue cards with a little speech Mom had written on them. We believe that it would have been written for Lillian Hagan’s memorial service. Lillian and Bernie Hagan were parents of a close friend of Val’s, Norma Hagan, and they were renowned for their senses of humour, as was the entire Bailey family. Lillian lived to a very old age, and was healthy, spry and funny all the way through. It would have been a pleasant time in reminiscence at her service. We felt this little snippet of Mom’s writing caught a classic soundbite from her, which illuminates her proper sense of decorum, Dad and Uncle Bob’s joy in having fun together, always, and Mom’s generous sense of humour in the telling:
“Here’s a Hagan memory that my husband can’t, or won’t, remember. On the eve of our wedding, Bill and Brother Bob came to Lethbridge, and were kindly hosted by Lillian and Bernie. They were to join us at Mom and Dad’s house at 7:30 for a family gathering. Time went by, and more time went by. My mom was agitated and I was even more so.
Finally, much later than 7:30, we phoned over to Hagans. The boys were having so much fun with Bernie and Lillian, cracking one joke after another, that they had become unaware of the time and of the fact they were absent from the cup of tea date over at our house. Not a great way to start our marriage from my perspective, but Bill and Bob thought it was the highlight of the weekend.”

We love you forever, Mom.