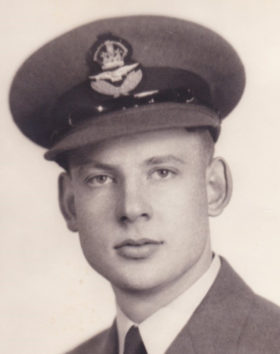 Walter was born in Stettler, Alberta on January 14, 1920, to Charles Rupert and Verna Genevive Wickson. One and a half years later he became a big brother to Mary.  While living in Stettler, he took Mary for a drive in the family’s Model T Ford; fortunately his father, Rupert was a competitive runner and managed to catch the car before any damage was done.

The family moved to Vancouver when he was six years old and then on to Victoria in 1928 where his father became the Manager of the Oak Bay Branch, Bank of Montreal.  Coming from a long line of bankers, Walter always expected to follow in his father’s footsteps.  At 17 while he was still in Grade 12, the Bank of Montreal told Walter that he would be starting his banking career immediately.  He was able to study after work to complete grade 12. Walter worked at the Douglas Street Main, Oak Bay and Trail Branches until 1941.

At eight years old, Walter was crossing a field in Kitsilano when he saw his first airplanes, four military floatplanes flying in formation over the water.  From that moment on he was hooked.  Before World War II he flew in a number of airplanes in Canada and the US.  Walter took RCAF flight training where he placed first in his class in both ground and flying schools.  At any point in his life he could tell you what kind of plane was flying overhead, often just by the sound of it.  Walter started building model airplanes as a boy and as an adult he formed Victoria Products to manufacture and sell vacuform airplanes worldwide.  He also collected airplane magazines (88 boxes and 19 crates!) and books from 1932 to the end of his life.

In 1941 Walter enlisted in the RCAF and served as a pilot during the war.  At the age of 22 he was posted to Durban, South Africa where he became the pilot-in-command of a Catalina flying boat with a crew of nine.  They conducted anti-submarine and search and rescue patrols over the Atlantic and Indian Oceans.  After his first tour was completed, he was posted to the Patricia Bay Airport where he trained new pilots on Catalinas.

In 1944 Walter married Jocelyn Barbara Ellen Cave at the Oak Bay United Church in Victoria, BC.  After the war he returned to work for the Bank of Montreal for seven years at various branches in Victoria and Vancouver.  During this period, daughter Susan arrived in 1946 and son Robert arrived in 1952.

Walter realized that he really missed the RCAF and in 1952 rejoined as an Accountant Officer, beginning his career in Gimli, Manitoba.  In 1954, with two children in tow and another on the way, he and Jocelyn were posted to RCAF Grostenquin, near Metz, France for three years where son Mark arrived in 1954.  On their return to Canada in 1957 they lived in Montreal, Ottawa and Halifax.  During his time in Ottawa, Walter studied to become a professional accountant by obtaining his CGA and was also promoted to Squadron Leader.  In 1966 he was the Senior Staff Officer of Finance for Maritime Command responsible for 29 ships and six bases.

On New Year’s Eve of 1967 he took his family, minus Susan, who was studying at Dalhousie, to Yellowknife, NWT where he ended up as Chief Accountant for the territorial government.  In 1969 they moved to Victoria, minus Rob, who was working for the NWT government in Yellowknife. Walter used his CGA and previous financial experience to work for the BC Securities Commission and then Supply and Services Canada until his retirement in 1985.  As the Victoria District Office Manager for Supply and Service Canada, Walter was responsible for a busy office of one hundred staff.  He enjoyed this position, especially the view from his window, where he could see the aircraft taking off and landing in the Victoria Inner Harbour.

After Jocelyn’s passing in 1971, Walter met and married Corinne Isobel Oliphant.  Later he adopted Corinne’s daughters, Elise and Margot.  During this marriage he and Corinne travelled the world, exploring many countries.  He never lost his passion for flying and at the age of 99 son Rob arranged Walter’s last flight where he was able to take the controls of a twin-engined Otter floatplane.

In addition to airplanes, Walter also had a passion for art.  He was a self-taught artist, who liked to sketch, paint in oil and work with pastels (his favourite).  He was also an avid photographer, who on special occasions enjoyed taking many painstaking family pictures.  Last, but not least, was his love of chocolate!  He always said there was a second stomach for dessert.

The family would like to thank Sunrise Senior Living and Hart House for their loving care of Walter for the last five and a half years.  We are also grateful to the staff on the 4th floor South Unit B of the Victoria General Hospital for their attentive care of Walter during the last two weeks of his life.  Thanks also to family friend, Elizabeth, who spent many hours by Walter’s side at the hospital.

No service has been planned, however, A Celebration of Life will be held in the New Year.  If you are interested in attending, please contact McCall Gardens with your e-mail address or phone number as they will forward the information to the family.  In lieu of flowers, donations may be made to Walter’s favourite charity, the Kiwanis Club of Victoria.  He was a member of Kiwanis for 30 years and recognized as a Fellow in 1998.