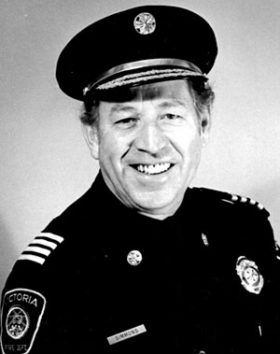 Eric passed away peacefully in his sleep on Wednesday morning, January 1, 2020 at Glenwarren Lodge. He was born in Calgary, Alberta, on July 17, 1920, where he spent his youth before coming out to Victoria in 1940 and joining the Royal Canadian Navy.  He was in the Navy until the end of WWII in 1945.  It was during this time in Victoria where he met and married his first wife, Patricia.

After retirement from the Fire Department, he was elected to Victoria City Council in 1981 and remained a member of Council until 1990.  During his time on Council, he was Ombudsman from 1985-1990 and was a Director and on the Executive Committee of the Union of BC Municipalities from 1985-1990.  In 1996, CFAX awarded him the Citizen of the Year Award and in 2004, he was named Honorary Citizen by the City of Victoria.  His community service continued as a Director and President of Silver Threads, which he served for 29 years.  Eric was also Trustee (9 years) and Chairman (3 years) of The Royal Jubilee Hospital Board, Director (7 years) and President (3 years) of the Victoria Red Cross, and a member of the Victoria Police Board from 1993-2001.  He was also a Director for the First Open Heart Society of British Columbia in Victoria.

Eric took up golf later in life and was a proud member of the Uplands Golf Course where he was involved in a number of committees to raise funds for Literacy Victoria and the Heart Committee.  He especially enjoyed his Saturday morning games with the “Dirty Dozen” and the camaraderie after the games with all the golfers he met there.

Eric met his second wife,  Anne, while both were employed with the Victoria Fire Department and they were married in 1982.  They enjoyed 37 years of marriage together with their trips and cruises, lunches and dinners at the Uplands with family friends and their frequent visits with his niece and her husband, Bruno. Eric enjoyed a Scotch in the afternoon and was having one everyday while at Glenwarren.

A very special thank you to his wife, Anne.  The love and care she gave to him was tremendous.  He was fully aware of that, loved her very much and certainly missed her after her passing late last year.  Also, a heartfelt thank you for the loving care and kindness he received while at Glenwarren Lodge.

There will be a Celebration of Life in the Sequoia Centre at McCall Gardens, 4665 Falaise Drive, Victoria, BC, at 2 pm on Friday, January 17, 2020.

Tributes, if desired, may be made to the First Open Heart Society of British Columbia, 1580 Pembroke Street, Victoria, BC.