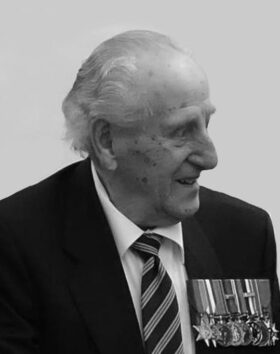 William passed away peacefully on September 1, 2020 at Veterans Memorial Lodge. He was born on September 15, 1922 on a homestead 20 miles outside of Neepawa, Manitoba. He is predeceased by 5 brothers and sisters. His oldest sister Sonia and brother Don reside in Winnipeg.

Bill joined the Lake Superior Regiment and fought in WW2 during 1944-1945. After serving in a peacekeeping role in Europe, he joined the Airforce as a tailor and was stationed in Winnipeg. He recently received France’s National Order of the Legion of Honour.  Bill met Margaret in Winnipeg, they married in 1949 and spent 71 wonderful years together.

After tours with the air force throughout Canada and Europe, he accepted early retirement and moved to Victoria in 1965. Bill worked at W&J Wilson Clothiers and finished his career at Woodwards as their head tailor.

Bill enjoyed gardening, walks around the nearby golf course, and excelled in stained glass. Travelling Europe and visiting family in Winnipeg kept Margaret and Bill busy.

A Celebration of Life to be held at a later time. Tributes, if desired, may be made to Veterans Memorial Lodge.