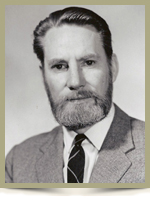 William Rodney, airman, scholar and gentleman, died at home on 26 March 2012. Born in Drumheller, Alberta, he joined the RCAF at the age of 17, trained at the Commonwealth Air Training Base Patricia Bay, and earned his pilot’s wings. He flew Halifaxes in operations over Germany and Occupied Europe as a Flight Lieutenant with RAF Squadron 78, and was awarded the Distinguished Flying Cross and Bar for “gallantry during active operations against the enemy”. After World War II, he attended the University of Alberta, meeting his wife Helen (McGregor) of Edmonton, and graduating with First Class Honours in History. During the summers, he worked as a Ranger in Waterton Lakes National Park, where he came to know the story of “Kootenai” Brown, whose definitive biography he was later to write and for which he received the American Association for State and Local History Award of Merit and Distinction. Bill and Helen married in 1950, when he took up a Beaver Club Trust Fellowship at St John’s College, Cambridge, where he completed a BA and MA in history and played ice-hockey for Cambridge University. After several years working in Ottawa for the federal government, he returned to Great Britain with his family and completed a PhD in History at the London School of Economics, under the supervision of Leonard Shapiro. He published Soldiers of the International, a History of the Communist Party of Canada 1919 – 1929, based on his doctoral research. In 1962 he moved to Victoria to take up a teaching position at Royal Roads Military College, where he stayed for the remainder of his career, ultimately becoming Dean of Arts. His former students remember “the Rod” with affection and admiration. During his years at Royal Roads, he took an active part in College and academic life, regularly publishing scholarly articles. Among many research grants and awards, he received a NATO fellowship to travel to French West Africa and report on conditions there. He was a Fellow, Royal Historical Society; Fellow, Royal Geographical Society; Life Member, Cdn Hist. Assn.; Mem., Cdn. Institute of Intl. Affairs; Johnian Society and Dir., Cambridge Canadian Trust. A firm belief in the need to return to primary sources drove him to travel frequently for research. In preparing Joe Boyle, King of the Klondike, for which he was awarded the University of British Columbia Medal for Popular Biography, he spent considerable periods in Roumania and in Turkey, in order to consult original documents, including the personal diaries of Queen Marie of Roumania. After the early death of his beloved wife Helen, and his own retirement, he travelled widely – to Japan, China, Burma, Australia, Turkey, Abu Dhabi, many European countries and Great Britain – and was active in the community at home in Victoria. He was instrumental in the establishment of the Gonzales Hill Preservation Society and Gonzales Hill Regional Park. He was also an active member of the Canadian Institute of International Affairs, Victoria Chapter (now CIC) and of the Vancouver Island Aircrew Association. He leaves his grieving children, Helen Catherine (Michel Drouin) and John William McGregor (Glen Dixon), and his granddaughter Emma, the apple of his eye. He is remembered with great affection by his sister-in-law Evelyn Rodney of Vancouver, his sister- and brother-in-law Gwen and George Molnar of Edmonton, many nieces and nephews, and friends across the world. He was a fine pilot, a rigorous scholar, a good friend, father and grandfather, an erudite, honest and honorable man. He did his duty.

The funeral will take place on Thursday 5 April at 11:00 a.m., at the Interfaith Chapel, University of Victoria, followed by a reception. In lieu of flowers, donations may be made to the Canadian Cancer Society. Condolences may be sent to the family below.