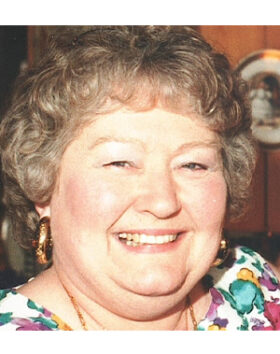 Alice passed away peacefully in her sleep in the early hours of August 7th. She was predeceased by her parents Fred and Helen Haines and her Husband Fred. Alice is survived by her son Freddie (Rachael), Step children Jack (Marianne), Gay Minch (Kevin), Tim (Leah), and Mikel, their children, grandchildren and great grand-children. She will be dearly missed by her brothers Doug (Elsie) and Don (Barbara), plus many nieces, nephews, friends and neighbours.

Alice remembered fondly her childhood in Fruitvale. She came to the University of Victoria to attain her teaching degree and began a lifelong membership in the Delta Kappa Gamma Sorority. Alice soon found her true calling as the consummate Grade One teacher. Summers those years were spent travelling to exotic locations from Norway to Japan. Looking for new adventures, Alice decided to do a stint teaching just above the Arctic Circle, at a settlement on Broughton Island (the Iceberg Capital of Nunavut). It was there that she met Fred and they were married a few years later in 1972. After spending a few years in Goose Bay, Alice’s desire to return to Victoria prevailed. They built their new home in North Saanich in 1976 and she resumed working for the Greater Victoria School District. Then began a period of spending a part of each summer at the Haines compound at Glen Lake in Eureka, Montana. Here she enjoyed good times with her Mom and brothers and their families, made even better by the arrival of her pride and joy, Freddie Jr in 1978. After brief ownership of King Coho Resort in Comox, Alice and Fred acquired their lot at Otter Point Resort near Sooke (1981). Their trailer and the community in the Co-op gave them nearly 4 decades of pleasure. From friendships built while watching families grow, one fishing season to the next – to the many memories made catching Salmon and Halibut in the nearby waters. We are not sure when Alice’s addiction to the thrift shops started, but it is safe to say that for many years she was a familiar face to many shops in the Sidney area…as well as Victoria, Sooke and Honolulu, where they often spent Dad’s birthday.

We would like to acknowledge the gentle care Alice received at the Aberdeen Hospital since 2018. We would also like to especially thank Alice’s long time friends Anne Larson and Ann Ilott for their many years of friendship and support. Alice was loving, generous, kind and compassionate, a celebrated teacher and above all, a dedicated Wife, Mother, daughter, sister and Granny.

We will miss her every day.

A Celebration of Life will be held on October 1, 2022 at 2:00 pm in the Sequoia Centre, McCall Gardens, at 4665 Falaise Drive, Victoria, BC. For those wishing to join virtually please use the zoom link below.