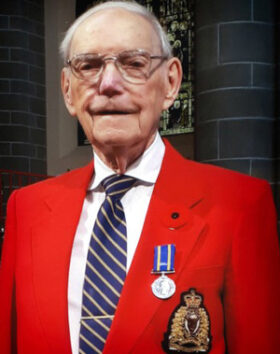 Art will be laid to rest, in the spring at the RCMP cemetery, Depot Division in Regina, Saskatchewan.  In lieu of flowers please donate in Art’s memory to Santa’s Anonymous.

Art’s life began in Cut Knife, Saskatchewan, with his childhood years spent in the communities of Macklin, Delisle, and Watrous with his brother Jim as they moved to different Anglican parishes that were served by their clergyman father. In the Autumn of 1941, the family moved to the town of Enderby, travelling through the mountains in their 1928 model A Ford. In the eyes of an eleven-year-old the Okanagan was like paradise after Depression-era Saskatchewan.  As a youth, Art spent happy summers working in an orchard and packing house in Oyama. Another family move took him to the railway town of Revelstoke. Here he began working for the CPR on the local section gang, then applying to begin a career in Locomotive Service. This exciting time for Art began in the Roundhouse in Field in the winter of 1947 at the age of sixteen. Art worked his way to the position of Fireman, where his skill earned the respect of Engineers, as together they strived to keep the trains running safely and on time through the mountains and valleys of British Columbia. With the era of the steam engine beginning to wane, Art’s life took a new direction as he applied at the age of twenty-one to serve with the RCMP. As he was writing the exams that would qualify him as a Locomotive Engineer, Art received notice to report for training at RCMP Depot in Regina. His career in the Force took him to Winnipeg, Carman, Fort Smith, Red Deer, and finally Ottawa, residing in the town of Manotick. During his time in Carman he met his first love, Dorothy who he married in 1956. His career in the force ranged from life in rural detachments to the anxious times in Ottawa of the FLQ Crisis and War-Measures Act, to arranging security for visiting Royalty and Heads of State. Art retired from the Force after twenty-five years of distinguished service with the rank of Staff Sergeant. Moving to Victoria, Art worked distributing books to school libraries and as a sales representative for Victoria Book & Stationery. After Dorothy’s death, Arthur found a new love, June, whom he married in 1990. Together they had the opportunity to travel, visiting and making friends in Japan, Switzerland, and the Holy Land.

Throughout his life Art found enjoyment in walking, birding, gardening, reading, history, railways, spending time at the gym, and sitting with a cup of coffee in conversation with friends. Art, a gentleman in every way, will be remembered for his example of esprit d’corps, his love and respect of nature, his active participation in the life of the church, the kindness and courtesy he showed to each person he met and his quiet faith in God the Creator, Redeemer and Sustainer.

Rest Eternal grant unto him, O Lord and let light perpetual shine upon him. Rest in Peace.