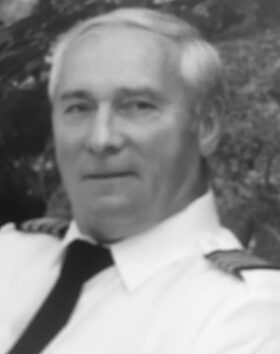 Our beloved Captain passed away last Friday after a short illness.  He died as he lived; quietly, with dignity, and surrounded by the people he loved most in the world.

Ed was born to Ernest and Edith Carley in Winnipeg, Manitoba.  The family came to Victoria in 1952. His childhood memories included Scouting, hockey, and waterskiing.

Ed kept a lifelong log of his flights as a commercial airline pilot from 1963 until his retirement in 2004. Throughout his career, he was proud to fly with the Victoria Flying Services, Pacific Western Airlines, Canadian Airlines, and finally Air Canada.

Ed and Jane married in 1967 and moved to Spruce Grove, Alberta in 1971 where they raised their family.  He was a devoted husband and father who built backyard skating rinks, doll furniture & playhouses. He repaired sports equipment, tea sets, and bruised knees.  As a family, they skied, skated, fished, camped, travelled, and more.

In 1992 Ed and Jane moved back to Victoria. In his retirement, he became Captain of their boat, the Dunfly’n and they spent many hours together on the waters of the Salish Sea.  He valued his memberships with the Royal Canadian Legion, Capital City Yacht Club and the BC Aviation Museum.  He was an avid sports fan, enjoyed reading history, and followed politics closely.  He had a cheeky sense of humour and was always sending a new cartoon or joke to family and friends.

He loved his grandchildren dearly and was generous with his time and wisdom.  He will be forever missed and always remembered.

The Funeral Service was conducted in the Sequoia Centre at McCall Gardens by Reverend Hilde Seal from St. John’s United Church on June 2, 2021 at 2pm.

A recording of the service can be viewed by clicking the image below.

Tributes, if desired, may be offered to the Canadian Cancer Society https://www.cancer.ca/

Condolences and happy memories may be offered to the family below.