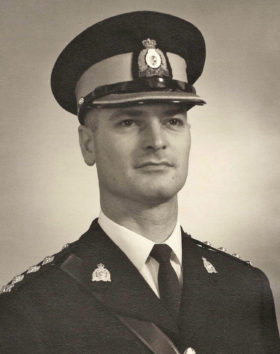 A great man, who will be missed by many, has left us.  Don was born in Edmonton, Alberta to Norman and Elizabeth and grew up across from Oliver School, attended Garneau High and 2 years at the U of Alberta in Geology, before joining the RCMP in 1950.  Don and a good portion of his Troop, upon graduation from training, was sent to Victoria, BC as it was at the time of the takeover from the BC Police and manpower was needed right away.  From Victoria, he served in Lake Cowichan and Port Alice.  He applied for the Laboratory Branch and was sent to Regina for assessment and some training, then back to Victoria and when accepted into the Fraudulent Cheque section, he was transferred back to Ottawa where he became an expert document Examiner and attained his degree in Psychology from Carleton U. 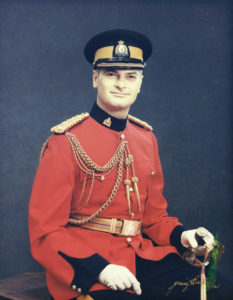 He designed the early font style for the Canadian passport and was the first to train and become the Polygraph Examiner in Canada.  He was promoted to Officer in 1967 and became Officer in Charge of the Crime Detection Laboratories in Vancouver and instrumental in designing the new laboratory building there.  Don was transferred one year later to be in charge of Regina Lab and subsequently promoted to Assistant Director of Labs and Identification in Ottawa, then Scientific Advisor prior to retirement.

Don had a full retirement and enjoyed The RCMP Veterans association; Music, especially the Tower bells and the Hand bell choirs at Metropolitan and First Metropolitan United churches; Square Dancing; Trailer travels; ‘Snowbirding’ in Arizona; Cruising and tours to other countries;  reading and TV.  While he had some major health problems over the last 25 years, he never lost his love of life.

Our heartfelt thank you to all of his doctors over the past 25 years, the Beacon/VIHA morning care service professionals the last 2 years and now especially to Dr. Brabant and Dr. Behroozi and the staff of 8 North at the Royal Jubilee Hospital who provided superb expertise and caring comfort to Don and our family during his last week.  To all our family and friends, thank you for your loving support.  It is immeasurable.

In lieu of flowers, support is welcome to Victoria Hospice, First Met United Church Music Program or your favourite charity.