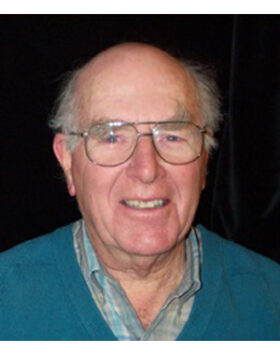 Our dear father, in his 100th year, passed away peacefully in his sleep with his wife of 75 years, Olive, by his side. 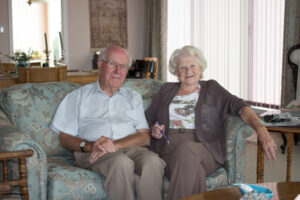 Dad was born in Liverpool, where he attended Medical School during the war. He then received his Ophthalmological Specialty from the Royal Eye Hospital at the University of London. After his residency, he joined the RAF as a Squadron Leader.

Dad was a very gentle and unassuming soul – when people would ask what he did for a living, he would just smile and say “both eyes, left eye and right eye” – it was his little joke.

Norman and Olive were married just after the war, on January 9, 1946. This was after Olive was able to leave her duties at Bletchley Park.  Norman and Olive emigrated to Canada in 1951 with their son Nigel in tow and settled in Prince Albert, Saskatchewan. There they became very close friends with their next-door neighbour, former Prime Minister, John Diefenbaker, whose wife was also “Olive”.

The family moved south to Moose Jaw in 1952, where Dad set up his eye practice and they welcomed daughter Heather and son Roger into their family in the years following.

Dad enjoyed the family cottage at Buffalo Lake, curling in the local Bonspiels. He was uncharacteristically notorious for perennially winning the Lion’s Club Turkey Shoot every Xmas.

Dad was an absolute crack shot, having trained himself to keep his hands and arms very steady for his intricate surgery, and purposefully slowing his heart rate.

On numerous occasions in Moose Jaw, his patients would pay in fresh eggs and produce and on one infamous occasion, a grateful patient brought by an enormous load of cow manure.

Dad was a great believer in liberal causes and a generous, but quiet, supporter of the underdog. He quietly assisted a number of immigrant physicians to find their place in Canadian society with letters of reference and personal support to attain hospital privileges. As an immigrant himself, he could relate to the hurdles of integrating into a new society and truly believed in Canada’s egalitarian culture.

In 1965, the family moved to Victoria, where Dad took over the former Eye practice of Colonel Elkington.

Dad enjoyed sailing his Cal 20, Miranda, out of RVYC, and one year won his class in the Maple Bay Regatta, surprising no-one more than himself.

With a lifetime 32 handicap, he played three times a week at Victoria Golf Club which he was genuinely passionate about – his constant refrain to his playing partners as he walked down the 7th fairway, admiring the view, was always “isn’t this marvellous…?”

He played and walked the course until the age of 94…his recommended secret to longevity.

In his later years, he could be found sitting in the sun on the deck at Gabriola reading a biography.

Dad leaves behind a large family, including nieces, nephews and cousins in Australia and New Zealand. He is survived by his sister Margaret in Liverpool and his devoted wife of 75 years, Olive, who is supported by sons Nigel (Darlene), and Roger (Jane) and daughter Heather. Norman was also very fond of his daughter-in-law, Laurence, who predeceased him in 2004

He was a very gentle Grandpa to 9 Grandchildren Sarah and Andrew, Cecillia, Monica and Christina, Magali Caitlin Olivia and Nick…and 8 Great-Grandchildren; Annabelle and Elise; Andrew Jr., Crimson and Clover, Florencia, Chloé and Gino

Dad lived a full, purposeful life. A gentle man of principle and character – he will be fondly remembered and missed by his many patients, friends and family.

Apart from his many accomplishments, his greatest legacy is the example he left to follow.

A special thank you from the family to the dedicated staff at Broadmead Lodge who made Dad so comfortable in his final months with us, in these difficult times; particularly Bikram, Donna, Preet, Harvi, Johanna, Navreet, Gurpreet, Patricia and of course Tracy. Warm thanks to Jeanalyn Asperacion who provided Norman with such excellent care.

There will be a private celebration of life at a time to be arranged in the future.

If desired, any donations could be made to one of Dad’s favourite charities;