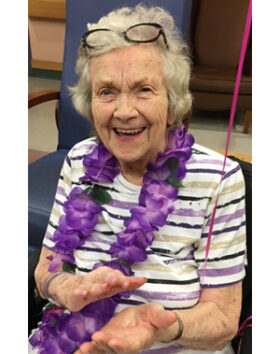 It is with heavy hearts the family of Betty Long announce her passing on October 16, 2022 at the age of 92.

She was born and named Florence Scott in Edmonton, AB on July 14, 1930. Surrendered for adoption on December 24th, she was later adopted in March 1931 by Harold & Ethel Routledge of Lethbridge, AB. She was renamed Helen, her birthdate changed to July 31st, and was raised as a twin with another adopted child named Robert.

Betty had fond memories of growing up on the prairies especially the summers spent at the family ranch outside Pincher Creek. At the age of eighteen, she eloped to Great Falls Montana to marry Robert Buchanan Long. They resided in Lethbridge where their first two sons were born.

The family relocated to Victoria in 1955 and purchased and ran a hotel on the Gorge waterway. In 1963 following the birth of their third son the family purchased a home in Oak Bay where Betty remained until 2021.

Betty loved entertaining from large family gatherings, bridge luncheons, and her legendary Grey Cup parties. She really enjoyed being around people and that showed through her volunteer work (25+ years with the Royal Jubilee Hospital Auxiliary) and other community involvement.

Throughout her life Betty’s greatest passion was music. She had a beautiful voice, was an accomplished pianist, and even took up the ukulele in her later years. She was saddened when the lingering effects of childhood polio affected her ability to play anymore.

Betty had a sunny and sweet disposition. She always tried to look on the bright side and was warm and kind to all she met. The family has lost a most precious jewel and she will be sorely missed.