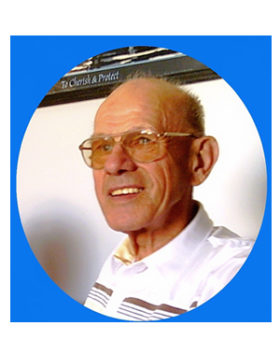 Leo passed away peacefully on Sunday, March 29, 2020 at Mt. St. Mary’s care home in Victoria BC at the age of 90. Leo was born in Beers Holland and was one of 9 children.

Leo immigrated to Canada in 1956 and ended up in Calgary. Maria followed and they were married in 1963. They moved to Nelson where Leo was the first graduate of Notre Dame University.

Leo was a dedicated elementary teacher at St. Joseph’s in Nelson and then in Slocan City, South Slocan and finally Brent Kennedy in Crescent Valley.

After Nelson, Leo moved his young family to Slocan City and then Slocan Park. In both places, a major characteristic was his big, beautiful organic gardens that were a real sight to see (and taste)! Two other hobbies were tinkering in his workshop and traveling all over North America – usually with Dutch visitors.

Leo was also an active member of the Knights of Columbus, Church choirs and the Catholic Church community.

In 2004 Leo and Maria moved to Victoria to be closer to their two daughters and their grandson, James.

Leo is survived by his wife Maria and his two daughters, Joanne (Curtis) Hendrix and Bernadette (Jay) Leaman and his grandson James. Also, his siblings and numerous nieces and nephews. He is pre-deceased by one brother.

A Mass of Christian Burial will be held at a later date due to COVID-19.

Forever in our hearts – we will miss your happy smile.