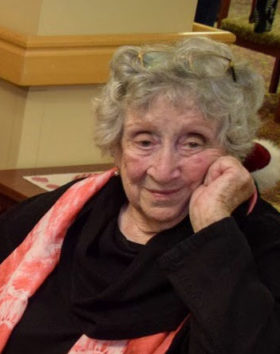 Born in England to Moyra (Browne) and Guy P.L. Drake-Brockman. She grew up in the Republic of Ireland. Survived by her loving sons Dominick (Ellinor), Andrew (Maureen), Christopher (Ruth) and Sean; grandsons Robert (Kashena), Matthew (Sarah), and Benjamin (Katherine) and six great-grandchildren.  Predeceased by her twin brother Guy.

With family roots in Canada, Ireland and the U.K., Marcia was evacuated to Montreal at the beginning of WWII.  In 1942, aged 17, she returned to England with a trans-Atlantic convoy, a perilous, weeks long trip.

She promptly joined the WRNS on arrival in England. Within a week of reporting, she volunteered for “arduous, boring, extremely confidential duties”.  These duties turned out to be operating the machines that broke the German Enigma Codes; work so secret that she never described her service, even to her husband, until the 1980’s after being released from the Official Secrets Act.  She was proud to receive her Bletchley Pin and War Medal in recognition of her service only recently.

Marrying Lieutenant Charles M. Williams (Canadian Army) in 1944, she returned to Canada in 1946 and raised her sons in Grand Mere and later Westmount, PQ.  While working at the Douglas Hospital, in Montreal, she pioneered community living for mental health patients founding Newstart, a group dedicated to this work.

In 1983, she relocated to Victoria.  There, the mild winters allowed her mother from County Mayo, Eire to join her for her own final years. Marcia was active in the community, joining many causes involving support for the disadvantaged including church outreach programs, and Woodwynn Farms.  Since 2015, she has lived at the Cridge Seniors Centre where, at age 90 she organized Pay-It-Forward, a scholarship fund for First Nations women.

An activist, avid gardener, voracious reader and devoted parishioner of St. John the Divine Anglican Church, she remained active and engaged to the very end.

The family wish to convey their gratitude to Marcia’s wide support network including her many friends, her church, the Royal Jubilee Hospital and most particularly the entire staff and fellow residents of “The Cridge” for their kindness and friendship during her four years of residence.