With much sadness, we announce the passing of Robert “Dale” McIntosh. Dale was born in Quill Lake, Saskatchewan on June 25, 1938, to Donald and Sarah (Cal) McIntosh.

Dale had a passion for music, teaching, and for helping others, which he manifested into an extensive career in education, beginning as a teacher and administrator in Rosetown, Saskatchewan. He taught in Edmonton, Alberta and was a researcher and sessional lecturer at the University of Alberta from 1970-1972. From 1972-1974, he was the supervisor of music and coordinator of performing arts for the Government of Alberta. In 1974, he joined the Faculty of Education at the University of Victoria and progressed to the Chairman of the Department of Art and Music Education in 1986. Dale’s love of music history allowed him to research and publish two books on the music history of Victoria and one for all of British Columbia. After retiring from the University of Victoria in 1994, he worked as a web design instructor for BCIT and was actively working until his death.

He met his lovely wife Margery in Rosetown, Saskatchewan while he was teaching at the local high school there. They were married in 1961 and expanded their family with the addition of their daughter Kathryn and grandchildren, Sara, Alexis and Samuel. Dale was a quiet, supportive husband, father and grandfather, always willing to lend a hand to his family when they needed it. Their family home was always filled with music as Dale had a wide range of musical interests from Baroque to Jazz to Contemporary. Dale and Margery also enjoyed travelling and went on many cruises together. 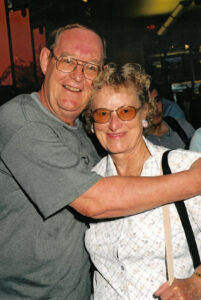 Dale also volunteered his time within the community, directing many musical concerts and plays in his role as choir director for the First United Church in Victoria and Grace United Church in Edmonton. He enjoyed walking their dogs on Dallas Road near the music of the ocean and he was an avid gardener, growing many beautiful dahlias in the garden over the years.

He is survived and missed so much by his loving wife Margery, his daughter Kathryn, and his grandchildren Sara, Alexis and Samuel.

A private family service will be held at a later date.

Please feel free to remember Dale in your own way. If desired, donations in memory of Dale may be made to The Royal Jubilee Hospital Victoria Hospitals Foundation – 1952 Bay Street – https://www.victoriahf.ca/donaterjh/