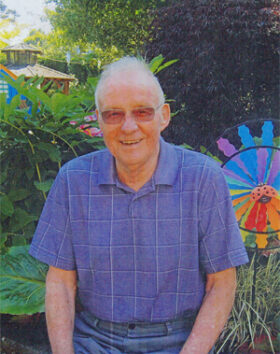 Norman “Paul” Sales was born 80 years ago in the middle of World War II in London England, the eldest of two children.  Born to Norman and Esme Sales, his father worked in the law courts there before going into the diplomatic corps.  Paul spent the first years of his life, mostly with his grandmothers, as London was considered too dangerous for young children.  After the war his father was posted to India, the first of three postings to that country.  Paul went with his parents to the second posting but was sent away to boarding school at the age of seven for three years.  He fondly remembered his time in the foothills of the Himalayas and used to tell stories of spiders the size of small kittens dropping onto beds in the night.

With further postings, Bombay, Delhi, Ottawa and Delhi twice more, Paul spent most of his time in boarding schools either in India or England.  He attended Sir John Cass College at the University of London, graduating in pure Mathematics in 1964 and then working in the National Physical laboratories.

Paul met his bride to be, Judith Taylor, in London at a distant relative’s house in March of 1965.  Shortly after they met, Paul gave Judith a Turkish puzzle ring – four connected circles that intertwined to create a ring.  He jokingly told her that if she solved it, he’d marry her.  She did it while he was in the washroom.  They were married that Christmas.  A whirlwind romance of love at first sight which was a shock to his family as they had always thought he was a quiet retiring professorial young man and marrying so young, 24, to a colonial teaching in the slums of London was more than they could fathom.

Paul and Judith came to Victoria in 1966 to meet Judith’s parents who weren’t at the wedding because her sister was married here in Victoria the exact same day.  Paul started work at the University of Victoria the following January in the brand new ‘how does this work?’ computer centre where he was a systems analyst and programmer until 2003 when he retired after 35 years.

Paul was a quiet, loyal, gentle man.  He played soccer all his life travelling frequently with his senior rec teams to play teams in other countries and coaching youth teams.  His Victoria City Football Club team was full of characters, and they were popular additions to tournaments up and down the west coast of North America.  He was the registrar for Gorge youth soccer for years.  He just loved the game, was a rabid, long-suffering, Tottenham Hotspur fan. He never missed a game, either league or championship.  Indeed every four years he would put a big sign on his office door at the University saying “Don’t mention world cup games in this corridor!” He was taping them.

Paul and Judith had two children, Jeremy in 1971 and Rebecca in 1973.  Jeremy is now a Director General with the federal government and Rebecca is a researcher in the critical care unit of the Ottawa hospital. They, and their wonderful spouses and children have lived in Ottawa now for years but the grandchildren love coming out every summer to stay with their Granny and Poppa.

Paul was amazingly handy and when he and Judith bought a tiny house in 1969, for the princely sum of $22,000, he added and added to it.  A meticulous planner, draftsman, carpenter, he designed, built and rearranged it until it meanders through staircases, into what Judith and Paul have loved living in for over fifty years.  They lived in chaos and pink insulation for years, each renovation or build meant new changes and rooms added.  One year Paul hung a tire swing for the children in the living room when they ran out of money and couldn’t afford drywall.  The children rode their scooters and bikes and played there on rainy days. Paul brought 99% of Judith’s house wishes into fruition although he did draw the line at a crow’s nest gallery on the roof with a spiral staircase access.

Paul was a beautiful skier and for over ten years the family went every other weekend to Mount Washington where he would be up on triple black diamond runs with the children having a glorious time.  As a chaperone, he went with the Lambrick Park high school band on their annual band trip. Paul and Judith had lots of close family here in Victoria, and had family dinners every Sunday night for years. Paul worked hard all of his life, loved to coach his children, attended concerts, graduations, and helped Jeremy and Rebecca renovate their first houses, here in Victoria, weekend after weekend. He never lost his temper, swore, shouted or complained. Paul fell asleep every night reading the same page of his beloved Russian novels.  It took him years to complete them.

In retirement, Paul and Judith travelled the world through house exchanges, visiting Ireland, Germany, England, Wales, France, Belgium and Australia.  Paul was able to pursue his two big passions of photography and beer sampling, occasionally together.  They visited their children and grandchildren in Ontario, often staying for weeks at a time.  Paul learned that summer in Ottawa was better than winter, but happily shoveled driveways, watched numerous hockey and soccer games and walked the kids to their school buses.

When Paul was first diagnosed with mild cognitive impairment about 2012, he and Judith thought this would not make a difference in their lives, that they still could do house exchanges, travel, garden, see friends etc. and for the most part this was true.  When the diagnosis was changed to Alzheimer’s, it became increasingly difficult.  Gradually the disease took over, and he became more and more dependent on Judith and others.  He never complained about his fate, and remained unfailingly positive about what time he had left.

Paul found a fantastic and loving home at Luther Court – first as a member of their adult daycare program and later as a resident.  The amazing staff got him to sing, dance (two thing he never did before) and help with odd jobs like handing out napkins, moving chairs or emptying garbage bins.  Jenine and Vivienne were wonderful with him, and he lit up in their presence.

The pandemic was especially hard on Paul.  He couldn’t understand why he couldn’t visit his new friends, and eventually the increasing toll became too much and Paul was placed permanently in Luther Court.  It was an incredible challenge for him, as his constant companion for almost 55 years was unable to visit, reduced to conversations through a screened window.  The staff at Luther Court were amazing to Paul, and he happily wandered the halls for hours on end, talking to residents and staff and even sitting in on ‘staff huddles’.  Over the last year, Jeremy and Rebecca alternated coming out every month to see Paul and the grandchildren were able to visit as well.

Paul leaves behind his beloved wife Judith, his devoted children Jeremy (Bettina – Owen and Erika) and Rebecca (Alan – Gavin and Collin).  He valued his family above all else.  He lived a wonderful life and will be sorely missed.  A memorial service and celebration of life will be held in the spring.