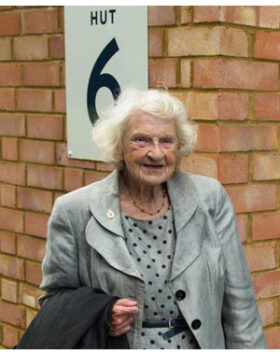 Olive was born over 101 years ago in 1921 in Berwick-on-Tweed to BBC Engineer Geoffrey Gore and his Librarian wife Lillian. To her family and to those who knew her she was a very unique character and a fierce, red-haired force of nature.

Mom passed in her sleep at Veterans Memorial Lodge at Broadmead on September 23, predeceased 2 years earlier by her husband of 75 years, Norman.

From London to Prince Albert to Moose Jaw and finally to Victoria, our Mom leaves behind a large and growing family. She is survived by her sons Nigel (Darlene) and Roger (Jane) and is predeceased by her beloved daughter Heather and daughter-in-law Laurence. She leaves behind nine grandchildren and nine great grandchildren, with one more on the way. All of her offspring are left with Olive’s legacy of determination, self-reliance and optimism. Olive lived her life to the fullest as can best be described by her good friend Fay Russell – who wrote the following in the Canadian Federation of University Women (CFUW) newsletter.

Olive Bailey, Canadian Federation of University Women Past President 1987-89.  Olive was President when the national AGM was held in Victoria in 1987.

CFUW brings treasured memories to mind, particularly of friends that have been there with us and are now sadly gone. It was my pleasure to become a friend of Olive Bailey, a past president, and Bletchley code breaker, sworn to secrecy by the British Official Secrets Act.

How did she keep it from her dear husband, Norman, for so long?

You had to know Olive’s incredible joie de vivre and exuberance to have understood how challenging that must have been for her. She had amazing stories to tell me as we drove to meetings. She knew the character from the mystery, “Agent Zig Zag” and shared her reminisces with our book club. He was a double agent and fascinating to Olive and others.

Olive recounted her missions during the war when she had to retrieve parts from downed planes, how she found a mole in an airplane factory where they were making Halifax Bombers and how she answered the Bletchley recruiting ad by finishing the Times crossword in under 10 minutes. Her degree in Mathematics from London University likely sealed the deal.

She loved travel with a passion and she regaled us with wonderful tales of her adventures.

Once she held her meeting at her cottage on Gabriola Island, another time she talked about Russia and had cupcakes swirling the icing a la Red Square. She swore she didn’t cook yet she hosted divine dinners and we all gobbled up Norman’s famous shrimp sandwiches.

How do women get away with this trick?

On a more serious note, Olive was very claustrophobic as a result of being trapped underground during an air raid. Her friend had given her a pin with her name on it. As she rushed to escape, her pin caught on something so she had to stop to retrieve it. That was the moment she was delayed and that delay saved her life.

I won’t forget Olives’ 100th birthday when her daughter-in-law, Darlene, and myself asked our fellow CFUW members to come to wish her well, but because of Covid we had to be outside the Broadmead Lodge and she was dressed up inside. We used our phones to communicate with her.

As more of us might also meet Olive’s age of 101, let us remember her example and cherish our CFUW activities and friendships. Her advice was to keep going to CFUW!

Our blessings and gratitude go to Olive, for sharing your amazing life.

Olive was the recipient of the Bletchley Service Medal and the Queen Elizabeth Diamond Jubilee Medal.

Mom has been well looked after for the past five years by the nurses and staff at Broadmead Lodge – especially under the care of Maureen, Kim, Tina, Parveen and of course Tracy.

No service or flowers by request, but donations in Mom’s memory to the Veteran’s Memorial Lodge at Broadmead or Nigel House or CFUW would be very welcome.