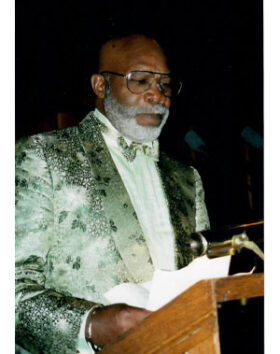 Patrick Sixto was born in Grande Riviere, Trinidad, the second oldest child of Roy and Claudia Sixto. His stories of childhood reflected his love for his five siblings, his adventurous spirit and his love of nature. Patrick’s work ethic developed at an early age through tending his hidden garden and jockeying to guide tourists through the Pitch Lake. His hard work led him to caddy for golfers and discover his passion for the game. His first career decision was to join the First Battalion Trinidad and Tobago Regiment where he made several life-long friendships. In 1967, he married Lera Alexander, the young woman who captured his attention three years prior. The following year, he immigrated to Canada and was soon followed by his young bride and their new baby, Richard. Unlike many Caribbean immigrants at the time, Patrick chose to go directly to Calgary. This decision launched a life-long career in Oil and Gas working on projects across Alberta, the Maritimes, and eventually Saudi Arabia. Calgary was also where Patrick shared his love of Carnival and T&T Culture. He was a founding member and past Executive Director of Calgary Carifest and President of the Trinidad and Tobago Canadian Association. He was instrumental in bringing the culture, food, and warmth of his birthplace to his home on the prairies. This was one of the many ways he gave back to the country that welcomed him.
Patrick was blessed to have travelled to over 20 countries, making many friends from around the world. His favourite adventures were climbing Mount Kilimanjaro, sailing the Nile, and visiting Sri Lanka. In his retirement years, he continued to travel, golfed twice a week, and found joy in building a magnificent garden, for which he received numerous awards.
As he neared the end of his life, Patrick simply said “Love one another”.
Patrick will be greatly missed by his wife of 54 years, Lera Sixto, his siblings, children, grandchildren and great grandchildren, and many others. He will be buried with his son, Richard Sixto, who pre-deceased him in December, 2020.

A Celebration of Life for Patrick Sixto and Richard Sixto, will be held in the Sequoia Centre at McCall Gardens, 4665 Falaise Drive, Victoria, BC on Monday, January 31, 2022 at 2:30 pm with Laura-Lee Parris, Celebrant. A reception will follow the service.

In lieu of flowers, the family is requesting donations be made to the Saanich Peninsula Hospital Foundation.