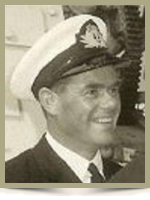 LCdr. Philip C. H. Cooke, RCN (ret’d) passed away on May 5, 2011 in Victoria. He will be deeply missed by his beloved wife of 70 years, Margie; his children Angie, Chris, Geoff, David, and Rob; his grandchildren Lili, Allison, Colin, Kathleen, Andrew, Clare, and Jenny; his sister, Christine; his nephews Phil, Richard, and Chris; and his niece Catherine. He will also be missed by Gustav, Debbie, Karen, Barbara, Laura, Ken, Jan, Alec and Betty.

Phil was born on December 20, 1919 in Tamworth, Staffordshire, England and immigrated to Canada at the age of 3 with his parents and two sisters. He joined the RCNVR in 1940, serving at sea in various ships, including HMC Ships Battleford and Matane. He later transferred to the RCN and served in HMC Ships Magnificent, Beacon Hill (XO), and New Glasgow (XO). After commanding HMCS Inch Arran (1959-1961), he retired from the RCN as XO of Royal Roads Military College in 1965. Following a second career in the business world in Vancouver, Phil retired fully to Salt Spring Island with Margie in 1981. There followed 28 happy years in which they enjoyed the pleasures of their waterfront home with family and friends. Although they spent time traveling to England, Europe, and New Zealand, they were happiest at home. Phil loved to sail, golf, putter in his workshop, take the dog for long walks, and smoke a quiet cigar while solving the daily cryptic crossword. He also enjoyed reading, bird-watching, and painting. Among his many fine qualities, Phil will be remembered especially for his optimistic outlook on life, his dedication to family, his sense of humour, and his calm forbearance in the face of adversity.

The family is deeply grateful to the staff of Amica at Douglas House for their loving care of Phil during the past year. Sincere thanks to the staff at the Victoria General Hospital who tended Phil with such gentle compassion during the last weeks of his life.

A Funeral Service will be held on Thursday, May 12, 2011 at 1:00 p.m. at the chapel at the Veterans’ Cemetery, 1190 Colville Road, Esquimalt with the Rev. Canon Andrew Gates officiating. Reception to follow at the CFB Esquimalt Wardroom, 1586 Admirals Road.

In lieu of flowers, the family would appreciate donations in Phil’s name to the Victoria Hospitals Foundation for VGH Palliative Care, 602 -620 View Street, Victoria, B.C. V8W 1J6. Condolences for the family may be offered at www.mccallbros.com.