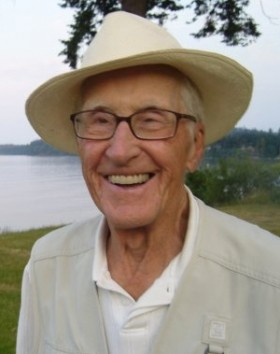 Born in Toronto, a middle child with 8 siblings, Sandy graduated from the University of Toronto with a degree in Electrical Engineering in 1943. He designed and built early television sets, and quickly progressed to the start-up and running of television stations, including CKCO Kitchener and CJOH Ottawa. Later, he worked for the Canadian Association of Broadcasters establishing international protocols at the UN in Geneva, Switzerland. Sandy retired to Victoria in 1988 with his late-wife, Doreen, where he curled and lawn bowled; living first on beautiful Harling Point, and much later, at Douglas House (Amica).

Grateful thanks to the warm and friendly Douglas House care team.

A Celebration of Life will be held at the Hotel Grand Pacific Ballroom on Sunday, February 28 from 2-5 PM.

Donations may be made to Canadian Chess Olympic Fund www.chess.ca/node/921.