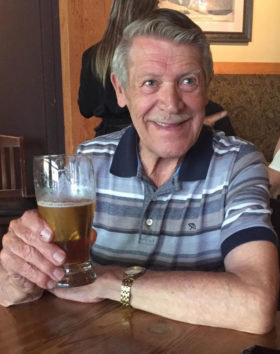 It is with deep sadness we announce the passing of our Dad, Trav Custance after a tough fought battle with idiopathic pulmonary fibrosis.  He leaves behind his 3 children, Brad, Karen (Glenn Sauer), and Gary (Karen Hathaway), granddaughters Michelle Sauer (Andy Vickers) and Christie Sauer.

Born and raised in Victoria with summers at Shawnigan Lake, Trav or Trevor as he preferred to be called in his latter years, was the oldest of 6 children born to Travers (G.M.) and Doreen Custance (nee Elford).  Predeceased by his brother Barrie, he is survived by his siblings Keith, Cheryl Orr (John), Sidney (Joni), and Barbara Drewry, along with beloved nieces and nephews.

In his early years, Dad worked at a variety of jobs, starting with the B.C. Forest Service, moving on to B/A Oil (later known as Gulf), Ocean Cement, and then a stint manufacturing dynamite on James Island.  In 1973, Dad joined the RCMP and was posted at the Victoria Airport Detachment in the newly created position of Special Constable.  Dad quickly earned the respect of his peers and co-workers, and for many years he was in charge of the Detachment.  The Airport taxi drivers addressed him as “Chief”, due to the respect they had for him for his fair and impartial treatment and his conflict resolution skills.  He retired from the RCMP in 1994, which coincided with the closure of the Detachment.

One of Dad’s great passions was military history having descended from a long line of military men, starting with his grandfather who fought in the Boer War to his Dad who was an enlisted officer in World War II.  He himself was a reservist MP at the Bay Street Armouries.  When Dad inherited his grandfather’s military kit, he took great care of it for many years prior to donating to the Canadian War Museum to be enjoyed by many as an artifact.   Dad was also one of the founding members of the Vancouver Island Arms Collectors Association, and he would take great pride and pleasure displaying his enviable collection of antique British military weapons at their annual gun shows.

He was a devoted grandfather to Michelle and Christie.  He and Michelle shared a love of horses and G-Paw would always help her prepare for the local Saanich horse shows by shining her riding boots, making her the envy of others.  Dad also took up model building, and he never ceased to amaze us with his skill and attention to detail when building an intricate scale replica from a set of blueprints.

Dad was a true gentleman and fiercely independent right to the end, and he was always kind and considerate of others.  He was quick with a joke and he never missed a punchline – he loved to make people laugh.  He enjoyed pub lunches, especially if he could flirt with the servers; and he was thrilled when family members were free to join him , especially his number one chauffeur Michelle.  He will be missed.