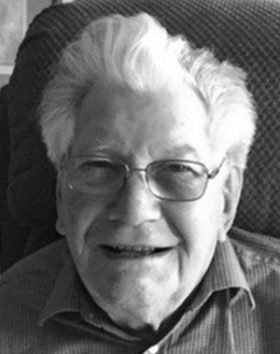 Born of Icelandic and Irish parents in Kindersley, Saskatchewan, Merv had BSA and BA degrees from the University of Saskatchewan. He was a WWII Veteran, member of the Royal Canadian Legion and Kindersley Masonic Lodge. He married Elaine in 1946 and operated the family farm at Beadle. He was a member of Parliament for the Kindersley Riding in 1953 and 1957. He and Elaine resided in London, England from 1977 to 1983 when he was Agent General for Saskatchewan for the UK and Europe. After retiring to Victoria, Merv enjoyed golfing at Uplands, soapstone carving and being a member of the Saanich Probus Club.

Predeceased by his wife Elaine on July 14, 2014, Merv is survived by his 4 children, Merlayna, Morley (Deb), Gordon (Sheila) and Janice (Will), 11 grandchildren and 7 great grandchildren as well as his sister Betty.

No service by request. Donations may be made to the charity of your choice.