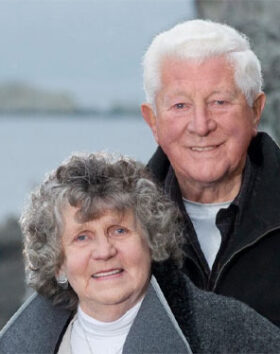 KAY AND FRANK MITCHELL Together Again🧡

Dad passed peacefully on September 15, 2021, after a long and debilitating illness. Dad was predeceased on August 7, 2018 by Mom, his partner and wife of 68 years after her brief battle with Cancer. The family extends its heartfelt gratitude to Ophelia and all the caregivers and staff at the Selkirk Seniors Village who regarded Dad as part of their families in his last three and a half years.

Born and raised in Esquimalt, Dad joined the Canadian Military and served in the infantry and paratroop division of the Canadian Army during World War II. After the war, at a local riding meeting of the Cooperative Commonwealth Youth Movement (CCYM, the CCF Youth Group), is where Mom and Dad meet. Six years of courting and chasing Mom, on Christmas Eve Day (1949) Dad took the plunge and invited Mom for a rowboat ride, out to a small island off Saxe Point Park in Esquimalt, where Dad proposed and Mom said yes. It was the start of a very loving, caring and full 68-year marriage. They were married on August 5, 1950, in the family home at 1303 Lyall Street, in Esquimalt, where they continued to live for many years.

1950 – 1951 was the start of a political life for both of them. Dad was first elected as the CCF MLA for Esquimalt-Port Renfrew in 1951 when he was just 25 years old, making Dad one of the youngest B. C. MLAs ever elected in the Province. He was re-elected in 1952, then defeated in 1953. Dad was also an MLA during one of the earlier B.C. coalition governments.

One of Dad’s pastimes was boxing; he actually did very well while competing. In addition, around 1949 dad joined the Esquimalt Boxing Club with Coach Nick Lystar, and Dad became a trainer there. The club was for both youth and adults; Dad really enjoyed his time with the club.

In 1956, Dad joined the Esquimalt Police and Fire Department (EPD). A role he found exceedingly rewarding. While on duty, he was police officer, until there was a fire, then he became a firefighter, and if there was an ambulance call, he went out on those calls as well. It was a busy time for all EPD members in those days.

Dad retired officially from the EPD around 1982. One of Dad’s favourite form of community outreach, was back in the early 1970’s was formation of a local Esquimalt youth group called the “Police Organization of Esquimalt Teens” (POET). The meetings were at our home. Mom and Dad would host the local youth executive as they planned their next events.

Dad loved to be busy and he knew how to work! He loved working with his hands, whether it was in his garden or with cement, pouring walkways or building concrete retaining walls, he loved a project. Dad was also a journeyman welder and plasterer, an accomplished gardener, beekeeper, boater, a devoted husband and Father.

A special mention of their two son-in-law’s, Cris and Glen for the countless hours they would both spend working on “Dad Projects”. Dad always said, “…he should have had more daughters, so he would have had more son in laws”!

Nearing the twilight of his working life, Dad decided to throw his hat in for an election once more, and he was elected as the Esquimalt – Port Renfrew NDP MLA in 1979, serving until 1986.

Mom and Dad both lived full and active lives. Their family and politics were their lives. They were the stalwart, caring architects of the NDP “election machine”. In Esquimalt – Port Renfrew, Mom was known affectionately as the ‘Godmother’.

In her younger years, Mom worked for the old Hudson Bay Company in Victoria as a cashier and then a head cashier, before staying at home raising her two daughters. Mom, also had a brief career working as a Sergeant-at-Arms for the B.C. Legislature, Mom volunteered as an executive member on many of the local NDP riding association executives. Mom also served as Dad’s campaign manager when needed. In the days before computers, Mom ran many a campaign. She was a strategic thinker. Mom knew the whole riding like the back of her hand. She also mentored many of the past and today’s New Democrats on how to run an election.

Upon retirement, Mom and Dad moved from their Esquimalt home to their little cottage on Gordon’s Beach (the beach) (they purchased it in 1960), west of Sooke into the Otter Point community where they called it home for over 30 plus years, until their passing.

One of the many gifts from Mom and Dad to our family and friends were summers, weekends, Christmas’s, birthdays and any other holiday or opportunity was a visit, a sleepover or a stay at the beach. Erin and I both have many fond memories of our times at the beach. Grandchildren David and Katelyn, and Emma and Mitchell always looked forward to sleepovers at the beach. They all spent many a day, week, a month or a year on the beach playing, in the creek, swimming, fresh and salt-water fishing, learning how to catch, net and clean a fish and plant and cultivate a garden. They all loved their visits with Granny and Grandpa. As well, we also spent many summers out and about our local B.C., waters up and down the west and east coast on the family boat, MV ErinMaur, Mom and Dad’s 36’ Canoe Cove cruiser. Named after their two daughters. Best fishing at Otter Point and up at Port Renfrew.

An extra special mention to my sister Erin, who became a constant companion to both Mom and Dad for several years. Driving them, taking them to appointments, caring for Mom over her last 8 weeks, and visiting Dad daily, if not twice a day, while he lived at the Selkirk Retirement Seniors home. The day before Dads passing, Erin and Dad were sitting down at the Selkirk trestle enjoying fresh and warm brownies. They had a marvellous time together, Dad was very happy!

Mom and Dad’s friendship with Heather and Bob Phillips from the Kemp Lake area of Otter Point was extra special; never a week went by, where Bob did not stop by for a coffee, a visit or a phone call.  Oh, the wonderful projects Dad and Bob would take on. Thank you, dear friends

Mom and Dad always enjoyed their outings with the ‘Usual’s’. Thank you ‘Usual’s’ for always including them, truly a full and a wonderful life, both Mom and Dad lived.

In lieu of a formal service or celebration, the family asks that if your lives have been touched or enriched by Kay and Frank Mitchell, whether you are a friend, a family member or you have a love of politics, please take a moment to raise your cup to celebrate your life and your friendships! Enjoy the moment.

Kay and Frank Mitchell, together again!