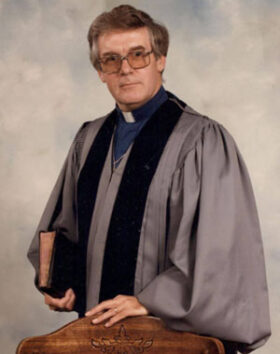 Passed away peacefully at home with family close by. Gordon was predeceased by Annie, his wife whom he met in Glace Bay and shared a strong loving partnership in marriage for 62 years. Gordon is survived by his children, Kimberly Anne (John van Gorp), Mary Lou (David Rawlinson), George (Susan), Michelle (Charles Lynn) and Philip and grandchildren; Sarah, Peter and Katelyn, Christopher and Alex, Eric and Michael, and Samantha and Nathan.

Born and raised in Louisbourg in Cape Breton, NS, Gordon attended Mount Allison University before being called to the ministry and attending Pine Hill Divinity Hall. As a minister for the United Church of Canada, Gordon received calls that saw him offer care, hope, promise, comfort and support to many from coast to coast across Canada. After student ministry in Saskatchewan and Bermuda, Gordon began a long career in New Brunswick that then saw him taking on calls in Toronto, Ottawa, Montreal, Lower Sackville, Edmonton and finally Victoria, BC where he and Annie retired. Aside from an endless level of patience and compassion, Gordon also developed a reputation for helping congregations with special projects that would help grow and strengthen the communities these churches supported.

Gordon, true to his heritage, was a great storyteller and was often a wee bit late to his next appointment because he had a story to share that would offer comfort, a smile or a laugh to those who needed it. Gordon will be remembered by the thousands whose hearts he touched, whose souls he succoured, whose spirits he lifted every day.