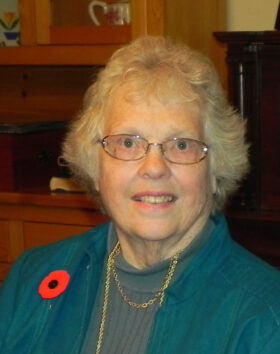 Karen was the middle of the three ‘Cronk Girls’ as they were known in the Blenkinsop Valley where they grew up. She and sisters Gail and Rhodena were raised by parents Ken and Eileen Cronk on the farm where her grandfather homesteaded in 1903 and where her mother was born. To Karen, family history was very important. She loved researching family genealogy. She traced her roots back to places in Ontario, England and beyond. She sought out her United Empire Loyalist roots and proved her descent from four different loyalists. She found relatives far and wide, made contact with them and traveled to meet many of them in her later years. She also traveled extensively across Canada and to New York on many genealogy-related research and conference trips, always with her friend Catherine. In 2019 she received the Leith Memorial Award for outstanding volunteer work on behalf of the United Empire Loyalist Association of Canada.

In her youth Karen was an avid Girl Guide and 4-H member. She was one of the first girls in BC to join a 4-H Beef club. She won accolades for her beef judging skills and her sewing skills in the Saanich 4-H Home Arts club which she encouraged her mom to start. She attended the Toronto Royal Winter Fair as a 4-H delegate in 1961, one of 10 youth who were selected for this honour. She earned both her All Round Cord in Girl Guides as well as her Gold Cord in Sea Rangers. As an adult Karen was a Brown Owl and Guide Leader in Woodwyn District. She served as Camp Advisor for two different divisions in Southern Vancouver Island Area as well as two terms as Camp Advisor for SVI Area, driving out to work at the camps in Sooke every week. She loved to camp and backpack and participated in many Guiders’ hikes and camps all over the province. In her later years she enjoyed hikes with the Peninsula Pals Trefoil Guild. Karen received a Gold Merit Award for her service to Girl Guides of Canada and was a member for over 65 years.

She met Bruce in 1957 when he arrived at her house on horseback with a friend who was interested in Karen. Story has it that Bruce and his big mare Shawnee kept getting in between Karen and the other suitor. The rest is history as they say. The engagement happened on her seventeenth birthday and November 10, 1962 was the big day. They were the first couple married in Gosworth Road Community Church which was built by her grandfather. It was the start of a new adventure that took them first to a little house in Brentwood Bay, then to the cabin at the ‘home farm’ and finally to the house they built on West Saanich Road that has been their home for the past 54 years.

Karen and Bruce had three children, Carolyn, Natalie and Ross. Son-in-law Steve added a new dimension to the family. Then along came four grandchildren, Rebecca, Susannah, Ethan and Michaela and grandsons-in-law Chris and Jon. In September 1979, Karen became a fixture standing on the side of West Saanich Road every weekday morning and afternoon where she safely ushered dozens of school children across the busy road to Durrance School. This job lasted for twenty-five years until her retirement in June 2004 when the last students left the school for good. She was honoured for this service at a retirement tea in May of that year.

As a result of her upbringing on the farm and her life-long membership in Girl Guides, Karen believed in being a good steward of God’s creation. She was passionate about eradicating invasive species and could frequently be found somewhere on the farm digging up any she could find. She was also a recycler long before curbside recycling came to be. Karen enjoyed many life-long friendships including many in Guiding. She kept in touch with friends from Mt Doug High and lunched regularly for many years with dear friends Gail and Marilyn from Durrance School.

Karen has left to her family love, devotion and a Godly legacy. She accepted her Lord and Savior at a young age and her prayers have been influential in many family members accepting the Lord, including her children and grandchildren. We have been blessed by her in more ways than we can count.