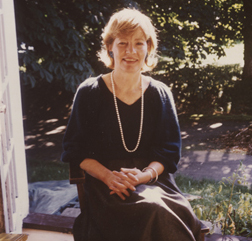 Anne Hart began her life as Margaret Eleanor Anne Hill in Winnipeg, Manitoba on October 7th, 1935 (a date she kept deeply secret) and ended it on October 9th, 2019 in Victoria, British Columbia after 84 years of a life lived with panache, passion, delight, and a strong sense of social justice.

Anne led two accomplished careers.  As a librarian, she assisted her mentor Agnes O’Dea in the nurturing of the Newfoundlandia collection at Memorial University Libraries. This Centre for Newfoundland Studies grew into the largest collection of published materials on all aspects of Newfoundland and Labrador anywhere and a centre for Newfoundland and Labrador scholarly bibliographic work. Under her directorship, she added an Archives unit in 1982 and it now stands on its own as the University Library’s Archives and Special Collections.

As a writer, Anne published three biographies (two of Agatha Christie’s fictional detectives, Jane Marple and Hercule Poirot, and one of Labrador explorer Mina Hubbard) and many poems and short stories.  Anne also guided other authors over many decades, edited scores of manuscripts, and was an active member of the Newfoundland Writers’ Guild, the Writers Alliance of Newfoundland, and the Writers Union of Canada, and was a founding board member of the Winterset Prize and Festival.

Anne was also a social activist who marched against the War in Vietnam, helped establish the Status of Women’s Council of St. John’s in the 1970s, battled alongside Dorothy Inglis and many others to include women’s rights in the Canadian Charter of Rights and Freedoms in the 1980s, served on the Newfoundland’s Human Rights Council and its Human Rights Commission, and helped bring refugees to Canada (as part of a sponsorship group led by Nancy Grenville to bring a family from Vietnam in the 1980s, and as part of a similar group along with her daughter, bringing two Syrian families to Victoria, BC in recent years).  An active supporter of the NDP, she participated in the 52% Solution movement and did her bit to encourage women in politics for all parties (Anne particularly admired Flora MacDonald); she even lured Helen Porter to her first NDP meeting!

Anne was recognized for her many accomplishments with Library Research Professor status at Memorial University, an honourary degree from Memorial in 1997, and the Order of Canada in 2004.  In her acceptance speech for the doctorate, Anne commented:

Thank you, Newfoundland. Like a number of those receiving degrees today, I came to this place from away, in my case many years ago. I grew up in Nova Scotia, and vaguely expected that Newfoundland would be much like other Canadian provinces, only newer. Even remembering such foolishness causes me to squirm. I could go on and on about how much I have come to love this passionate, singular and witty place, its solid sense of identity, its proud and encyclopedic sense of its past, but my ten minutes are going fast, and I must press on and thank: Labrador, the Big Land [and Memorial University]….

Whatever you do, I urge you to try not to co-operate with the forces of dullness and passiveness, to resist the slow erosion of hard-won human rights and social concerns by the cultures of fear, and to take on your fair share of responsibility for the planet we live on.

Anne abhorred fuss, mess, clutter, sexism, racism, and all injustice.  She loved Newfoundland, cats, dogs, horses, family, friends; literature, storytelling, theatre, politics, debate, and obviously the CBC; she shone at dinner parties, meetings, and planning sessions of all kinds.  If you asked her a question, she would often answer with a good story, often funny; she was known for her wicked sense of humour.

Anne was orphaned at the age of 7 and thereafter she and her siblings John and Mary were raised by Anita and Wylie Baird in Nova Scotia, on the Nappan Experimental Farm which Wylie managed.  Anita was their aunt; she and Anne’s father, Edgar Murray McCheyne Hill (civil engineer) hailed from Guelph, Ontario.   Anne’s mother Adeline Olive Earls (teacher) had emigrated from Clones, Ireland, after studying at Queen’s University, Belfast and the Sorbonne.  (John later settled in Montreal as a chemical engineer with his wife, Anne Christie; Mary married Robert Purdy and settled in Amherst, Nova Scotia).

After several years attending the two-room school at Nappan, Anne continued her education at Netherwood School for Girls in Rothesay, New Brunswick, and went on to earn a BA at Kings College in Halifax (where she met and married David Hart; they remained lifelong friends), and a library degree from McGill University in Montreal.  As a librarian, Anne worked briefly at the British Museum library, the Dalhousie University Library (where she was Kipling Librarian), Queen’s University Library, and the Newfoundland Public Library, before going to work at the library at Memorial University of Newfoundland (MUN) (where David taught in the Psychology Department and her three children Susan, Peter, and Stephen all studied and/or worked over the years).

Anne dearly loved her siblings and extended family (and this always included the Harts; she was very fond of Archdeacon Stanley Hart and Mary Hart, for many years her parents-in-law); she also greatly enjoyed the company of two nieces who each lived in St. John’s for several years, Margie Purdy and Mary Hill; her son Peter’s partner Robin Whitaker, and her daughter Susan’s husband Stephenson Yang, as well as her grandchildren Peter and Stephanie Yang.  She had many dear friends, some dating back to her student days.  As a mother she was without parallel; she ALWAYS had our backs and we knew she would be fierce as a lioness if needed – but she didn’t bake cookies and she was often out at meetings or off at conferences – always dressed elegantly.  She offered constructive criticism for our school essays, she took us to political rallies, she welcomed our gangly teenaged friends at the dinner table (they remember her as a mentor) – and she brought home an array of interesting dinner guests herself, ranging from some young fellows she met on the train on their way to Newfoundland for the first time, to university colleagues, and to Elizabeth Smart (who smoked and drank and told enthralling stories) and many other local and visiting authors (a number of whom were regular house guests).  Christmas dinner always included somebody who would otherwise be on their own.  Anything and everything could be discussed at the table over good china, tea brewed in the old brown betty pot or a glass of sherry; debates could get heated but no fisticuffs ever broke out, perhaps due to the calming presence of the series of cats she adopted over the years (Stephen continues the tradition of adopting homeless cats at his home in Kingston).

Anne was predeceased in 2010 by her second child, Peter Hart, an accomplished historian of the Irish Revolution who held the Chair of Irish Studies at MUN; this was the chief sorrow of her life.  But she had many joys and accomplishments, and spent her last years with her daughter Susan in Victoria, BC, frequently visited by her son Stephen (Kingston, Ontario).  The strength of her personality shines on.

Anne Hart, “Lettuce, Turnip and Pea”, pp. 33-39 in Dropped Threads: What We Aren’t Told, edited by Carol Shields and Marjorie Anderson (Toronto, Random House, 2001).  This story will tell you something about Anne’s keen sense of justice from her early childhood.

Anne Hart, “Help Me Hepplewhite,” The Blasty Bough, pp. 60-69 (Portugal Cove: Breakwater Books, 1976).  This story was based on Anne’s experience volunteering as a visitor at the Kingston Women’s Prison; however, she did not attempt to acquire any chairs.

Anne Hart, “The Friday Everything Changed,” in Canadian Stories and Poems Crossroads II, pp. 12-21 (Toronto: Van Nostrand Reinhold, 1979).  This story is based on Anne’s experience of attending school in rural Nova Scotia.  Countless Canadian schoolchildren read it every year as it has been anthologized in many school textbooks, including this one.  It was first published in Chatelaine in 1976.

Anne Hart, The Life and Times of Miss Jane Marple (New York: Dodd, Mead & Co., 1985).  Both this book and the one about Hercule have been reissued many times, in several languages.

Dr. Marianne Stopp, a Parks Canada historian who specializes in Labrador history, kindly contributed some comments about Anne’s work on Mina Benson Hubbard Ellis (1870 – 1956), who was explored and mapped an interior section of eastern Labrador in 1905, and in 1908 published her Labrador experience in A Woman’s Way Through Unknown Labrador.  This book became a classic of Canadian exploration literature and Mina Hubbard was recognized for this by being made a Fellow of Britain’s Royal Geographical Society in 1927.  Marianne says:

Your mother was the first to research the life of this explorer of interior Labrador, and to find unknown, original documents about her life.  In doing so, she both brought Mina Benson Hubbard Ellis to life but also gave her the gravitas that she and her accomplishments deserved. Before your mother’s work, Hubbard Ellis was largely considered a plucky little miss whose accomplishments were really those of her male crew.  (That same perspective was never levelled at male explorers such as David Thompson, Henry Youle Hind, Albert Peter Low, and many others, who were entirely dependent on their Indigenous, Metis, and backwoodsmen travel companions.  Your mother’s biography of Hubbard Ellis became the foundation for the research and submission report for the Historic Sites and Monuments Board of Canada. The Board recommended to the Gov’t of Canada that Hubbard Ellis be designated a person of national historic significance, which was ratified in 2018.  This could not have happened without your mother’s in-depth study of Hubbard Ellis’s life.