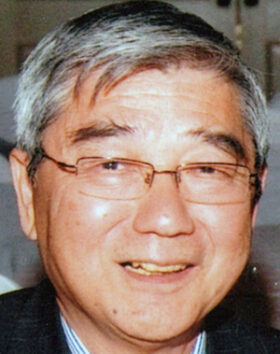 Victor Ta-Te, 81, passed away unexpectedly but peacefully on October 12, 2021 surrounded by family. Victor Ta-Te Peng was born in Shanxi (山西), China to Peng Kung-I and Peng Zhao Shao Shia. He grew up with his older sister Joanna and 3 younger brothers Joseph, James and Bill. When he was 10, his family moved to Taiwan where he graduated from Taiwan Tech (NTUST) with a degree in mining. He worked at a mining company and also at the Taipei School for the Blind and Deaf. In 1965 he received a scholarship from the University of Fribourg in Switzerland to study chemistry.

His future wife Penny Yu-Hua graduated from university in 1969 and joined him in Switzerland. In March of that year, they were married in Munich, Germany, then immigrated to Canada in April and settled in Edmonton, Alberta where he worked in a hospital lab. In 1980, Victor moved to Victoria with his wife, 2 sons and his parents who had retired and also immigrated to Canada. Once in Victoria, he decided to quit working in the lab and become an entrepreneur.

Together with his wife Penny, they operated a number of successful businesses until retiring in 2008. Victor loved to travel, a passion that began with his first trip back to China in 1985 to visit relatives. Since that trip, he took several vacations and cruises around the world. On his last trip, he stayed in Chengdu and visited the 3 Gorges Dam with the help of his friends who wheeled him around. Victor is survived by his wife Penny Yu-Hua, sons Gordon and James, daughter-in-law Andrea (wife of James), and grand-children Gerry and Justin.

A private funeral service with family in attendance will be held in the Sequoia Centre at McCall Gardens, 4665 Falaise Drive, on Thursday, October 21, 2021 at 11:00am. All others are welcome to attend virtually via the following Zoom Link…